Note: The Realm of Larnasia is published under the name of GR Taylor to keep it separate from my other releases as Alexa Preece.

The Realm of Larnasia is a trilogy that follows the story of Princess Alivia Farican, a young witch with a great destiny to become Queen and unite a fractured realm. Her father, King Sardimon, has other ideas, and plans to have her murdered.

Galen Lucas, a sorcerer and long-term friend of Alivia’s mother, Queen Lilianna, steps in to rescue the Princess as a small child. They flee the city of Larnasia together and adopt new identities as Palen and Evie, servants to the Pax household in the city of Perdita.

Larnasia’s Heir is a coming of age story for Alivia and follows her journey from childhood to young adulthood, the friendships she forms and the family she finds away from her own. When avoiding her destiny becomes unavoidable, will those friends and family stick by her or will she find herself embracing her future alone?

Larnasia’s Heir is available from the following retailers: 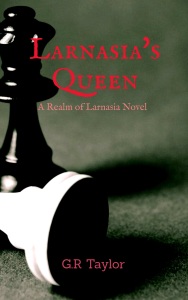 It’s not easy being Queen…

Having returned to the Realm of Larnasia to take her place as the rightful heir, Alivia Farican quickly learns that all is not fair in love and war, especially where the crown is concerned. Her disgraced father still seeks to control the royal line and put her brother on the throne in her stead and the friendships she formed while living as serving girl Evie begin to crack as the truth about her identity begins to sink in.

Forced to forge new alliances, some good and some bad, Alivia must find a way to free her imprisoned friends while adjusting to a new way of life, the life of a royal that was denied to her as a child.

As she struggles to build a relationship with her brother and fights to save the life of her protector and father figure, Alivia realises that the life of a queen is not an easy one and one she may need to lead alone.

Join Alivia on the next chapter in her journey as she struggles to embrace all that it means to be Larnasia’s Queen.

And, finally, the trilogy concludes in…

War of the Realms, released on 10th November!

May Rhyannon help them, the War of the Realms has begun…

As Alivia lingers between the world of the living and the world of the dead, her loved ones struggle to keep things together and it appears the Goddess Rhyannon has deserted them all. Tarik must assemble an army to take to Lattonia to defend his people against the Lattonian armies threatening their shores, an army that includes more than one of the men in love with his ailing sister.

The two realms clash in a battle in which no Queen can claim to be the victor and Alivia faces the hardest sacrifice of her reign so far.

Just how far will any of them go to stop the War of the Realms?
War of the Realms is the third and final novel in the Realm of Larnasia trilogy, a 5 star rated YA fantasy about friendship and family, love and war.